Commercial thinning block has started on an area that had previously been logged in the late 1960’s to early 70’s. This is the first time the VCF has hired a contractor for this specialized work in older plantations.  The trees that are not the biggest and the contractor targets trees that have obvious defects. The idea is that the trees left will increase faster in height and increment to produce a future full-grown crop tree.

Stand tending on some of the older plantations is ongoing. At this time activity is in the Selwyn area. The VCF usually likes to use mechanical methods to target the high brush or trees (such as Birch and Aspen) that are directly affecting the growth and performance of planted coniferous trees. The coniferous trees don’t grow as quickly as the Aspen and Birch and sometimes get overtopped by their branches. When the wind blows the branch ‘whip’ and injure the leader of a coniferous tree stripping away the needles and sometimes killing the leader of that tree. Removing the deciduous competing Birch and Aspen gives the coniferous Spruce, Fir, Pine, or Cedar an opportunity to grow and get above the other trees (lengthen and strengthen). The mechanical removal does not kill the Birch or Aspen, it slows them down. The Aspen has a huge root system with many stems (trees) from that root. If you are observant; in the Autumn time groups of Aspen have the same colour; these trees are all from the same root system. 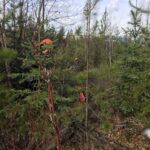 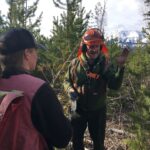 discussion in the field 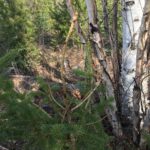 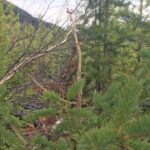 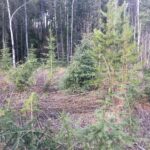 Preparation for planting and surveys

VCF staff has been preparing for the 2022 season. planting est 360,000 trees, spruce cedar, and fir. Free Growing surveys, mechanical stand tending, and regeneration surveys are all part of the plan. The planting and stand tending contractor is Integrity Contracting. The startup will be in May.

The spring planting starts at the beginning of May when the lowest elevation harvested blocks are clear of snow and frost. The summer season sees the planting activity move higher in elevation as blocks become snow and frost-free. The planting program usually ends by mid-July.

The greatest challenge each year is keeping the trees cool when the weather becomes very hot.

Occasionally, when access is poor, the VCF hires Yellowhead Helicopters to fly the seedlings into the block. When using helicopters, total weight is calculated which includes the seedling boxes and planting gear. These items are put into numerous slings. One sling at a time is hooked underneath a hovering helicopter and its load is dropped into preplanned GPS locations on the block. The planters are waiting in a location to receive their day’s worth of work. This type of planting takes careful pre-planning, timing, and safety measures

The number of trees planted was 500,000 which included a mix of Spruce, Fir, Cedar, and Pine. The greatest challenge to the growing season was the heat bubble during the planting season. Planters took time off and also started at first light. Early Reconnaissance of the Fire preparedness blocks that were planted to pine early in the season, as soon as the frost was out of the ground show positive results for survival. There are signs of heat burn to the south side of the tree but in general survival and health is good.