Four new trap sites have been set up in locations around the Selwyn, Swift Creek, and Westridge areas. Since the Spring conditions have been fairly cool so far therefore the insects have been relatively inactive for flying. Once temperatures reach above 16′ celcius that could rapidly change. Monitoring of the traps is usually done weekly.

Warren’s Root Collar weevil. This is another amazing insect it has a life span of about five years! Incredible lifespan for something quite small. This insect moves slowly it is related to the Bark beetle. Often in the field epicenters are noticed as the little critters crawl around from young tree to young tree. You’ll see groups of dead/red young trees. This insect is not in epidemic proportions, it is another amazing creature. 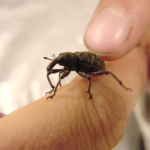 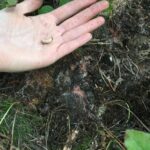 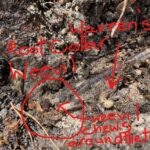 The VCF Fir  Bark Beetle traps have collected approx. 42,000 Fir Bark Beetles! The hot weather precipitated high volumes of insects and now by July 7th 2021 the flight appears to have slowed down. The Swift Creek trap has significantly fewer beetles than 2020. The Westridge has a trap for the first year, it has produced high collection volumes. The four traps are still being monitored and collected weekly.

The VCF staff has started setting up Fir Bark Beetle traps  on Swift Creek , Selwyn and Westridge. The first flight of Fir Bark Beetle adults are expected to fly once the ambient temperature reaches 16’C. There are trap trees felled to attract insects to the downed trees. The traps will be monitored through out the 2021 summer months, at the end of the season the data can be compared to what was collected in 2020.

Watch for photos and updates through out the season.

The VCF staff continue to monitor the Fir Bark Beetle  and new attacks on the surrounding forests at Swift Creek, 5 Mile Mountain (which include the bike park trail systems) and Pack Saddle. Earlier this Spring the VCF set up four pheromone traps and felled Douglas Fir trees at those sites. The objective is to lure the flying insects into these smaller trap areas rather than dispersing their flight over a larger area. At this date the Fir Bark Beetles have doubled in the traps and the surrounding felled and adjacent trees have thousands of ‘hits’ or entry holes. These are indicated by lots of ‘frass’ (fine sawdust) and immediate stress to the tree by loss of needles noted on the forest floor. As the season continues for these insects observations will be made to determine the best time to remove and process these trees to reduce further infestations to the adjacent forests. 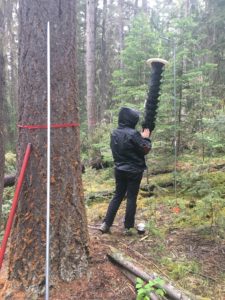 Weekly monitoring of the ‘trap’ for the Fir Bark Beetle 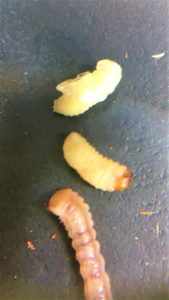 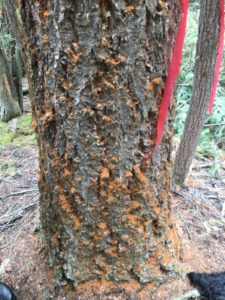 June 23 2020, Fir tree attacked by Bark Beetles. At this site there are over 30 mature Fir Bark Beetle attacked. 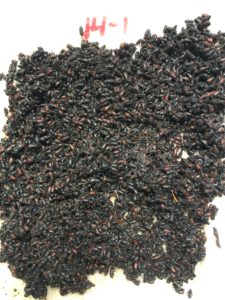 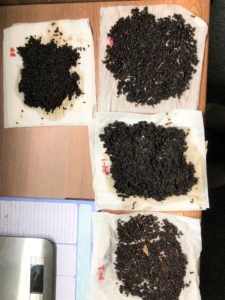 June 24 2020, the amount of beetles being ‘trapped’ has tripled to what was collected last week.

The initial observations by VCF staff were that main clusters of trees which were hit occurred along the bike trails systems. The recent bark beetle attacks were generally located around trail development slash piles and felled trees that were left in the forest after being cut down. It is the felled tree debris that attract the flying beetles.

D-Fir Bark Beetle host preference is windfall, old (over mature), stressed, or damaged trees. The beetles fly in the spring from April to July (when the ambient air temperature is greater than 16°C).  Females fly first to find a suitable host, and emit pheromones to initiate mass attacks.

Bait (pheromone) has been purchased and will be attached to the funnel traps for the first flight of the Beetles in the Bike Park. The intent is to keep the beetles from dispersing over larger areas.

The community forest staff are constantly monitoring the health of the forest in conjunction with the annual ministry forest health flights over our area of the province.

Is a pathogen found in most of our low elevation pine forests. It has caused severe damage to the pine trees and has contributed to the flammability of the dead and dying stands that we see around Valemount.

In the springtime sometimes you can hear the snapping of the flower as it propels seed into the air. This is how mistletoe spreads seeds to infect new pine seedlings underneath the infected stems and other seedlings nearby.

The first symptom of dwarf mistletoe infection is a slight swelling of the bark at the infection site. The parasite is identifiable when the yellow to green or brownish-green segmented shoots protrude from the infected part of the tree. They form about 2-3 years after the infection.

Partial cutting that leaves mature, infected pine trees standing exacerbates the spread of infection to create a perpetually infected stand. The only way known to break the cycle, is to sanitize the area by clearcutting all pine stems.

Western Gall Rust also infects pine trees and is most often found in young stands and plantations. The stem rust kills the tree when the rust mycelium girdles the stem. The gall rust does not require an alternate host and is one of the most prolific of the rusts. The rust spreads by releasing spores that can travel hundreds of kilometres.

The VCF revisits all cut blocks and manages the new forests by pruning and felling infected trees and by planting alternate species where appropriate.

At this time July 2021 there has been extreme heat and loss of snow pack and diminishing glacial ice. The VCF cautions everyone to be fire safe and fire prepared, the forests are volatile, a small spark can create a big fire. There is a camp fire ban.

Spring can produce some of the most unexpected wild fires. Even though people look in the mountains and see snow; it is a surprising contrast in the valley floor where daytime temperatures can be the 18 + C.Grass fires are most volatile in the Spring.

The first areas to plant will be the Fire Preparedness blocks. These areas were identified as high- risk  and the risk  reduced through logging/ harvest activitie. Fire Preparedness is done in different ways, sometimes it is by harvesting and making fire breaks. It can also be removing the accumulation of dry lower branches and ground debris (fuel) from the forest floor adjacent to homes. If there is a forest fire… the  removal of fuel reduces the intensity of heat produced and therefore reduces losses.

The Village of Valemount Community Wildfire Protection Plan (VCWPP) was commissioned in 2012. VCF initiated the process of updating this plan in March 2018 and continues to treat high risk areas around Valemount and along the corridor towards Tete Jaune. VCF is committed to help with fire preparedness for the community through planning and consultation.

Meetings were held with local agencies, the public and people who live adjacent to the most high-risk forests. The results of consultation were that some people were opposed to any harvest of the adjacent forest while others were frightened by the flammable forests in their backyards. Through this process, amendments were made to fuel management plans to accommodate concerns.

Some fuel management areas are not profitable to harvest as the trees are often non-commercial, dead and/or rotting. In spite of this, VCF continues to discuss and plan work with the Village and the Valemount Wildfire Base staff to minimize risk by creating fuel breaks that will be defensible in the event of wildfire.

Other fuel management areas around Tete Jaune Cache also require planning but are beyond the boundaries of the Valemount Community Forest. 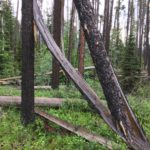 This area was attacked by Mountain Pine Beetle there is a high percentage of dead standing and fallen trees. These are planned for Fire Preparedness harvest the summer of 2020 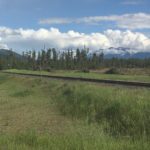 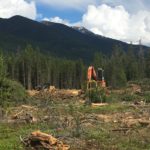 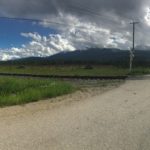 the treescape has changed